Ceiling Fans Save Energy and Money, Summer and Winter 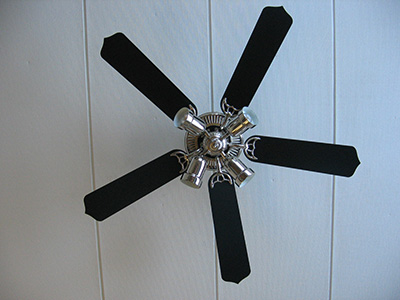 Ceiling fans don’t cool air like air conditioners. Instead they move air and help people feel cooler in summer. Many people don’t realize that they can also be used to help us feel warmer in winter, and so save electricity year round.

In summer, a ceiling fan creates the same effect as a breeze. It helps evaporate perspiration on the skin and cools it by a couple of degrees. For the cooling effect, the blades should blow air down on people, usually by rotating counter-clockwise when seen from below. The blades should spin with the upturned edges leading.

Most ceiling fans provide a button for switching direction. If your fan has this button, the fan can be used to warm your family in the winter. Warm air in a home rises, so the fan can be used to bring warm air down from the ceiling towards people. Push the button to reverse direction so that the downturned edges of the blades lead. In most fans, the blades will turn clockwise.

Now the fan will pull cool air from the floor up towards the ceiling, pushing down the warmer air near the ceiling towards people. At the same time, the fan isn’t blowing on people so doesn’t create a wind-chill effect.

The ceiling fan motors use less energy than air conditioners and furnaces, so each degree that they cool or warm is “bought” for less. Using ceiling fans is a good way to stay comfortable while saving electricity and money. However, turn them off when no one is in the room because moving the air around an empty room is of no benefit.

Ceiling fans come both with lights and without. To save even more electricity, some come with a dimmer control on the lights. The lower the lights, the less electricity used. You can choose your own ceiling fan from a lighting store, and El Cajon Electric will be happy to install it for you.